CHP dash cam shot of 3 Mules walking along Naciemento Lake Road prior to their arrest on January 23, 2020. 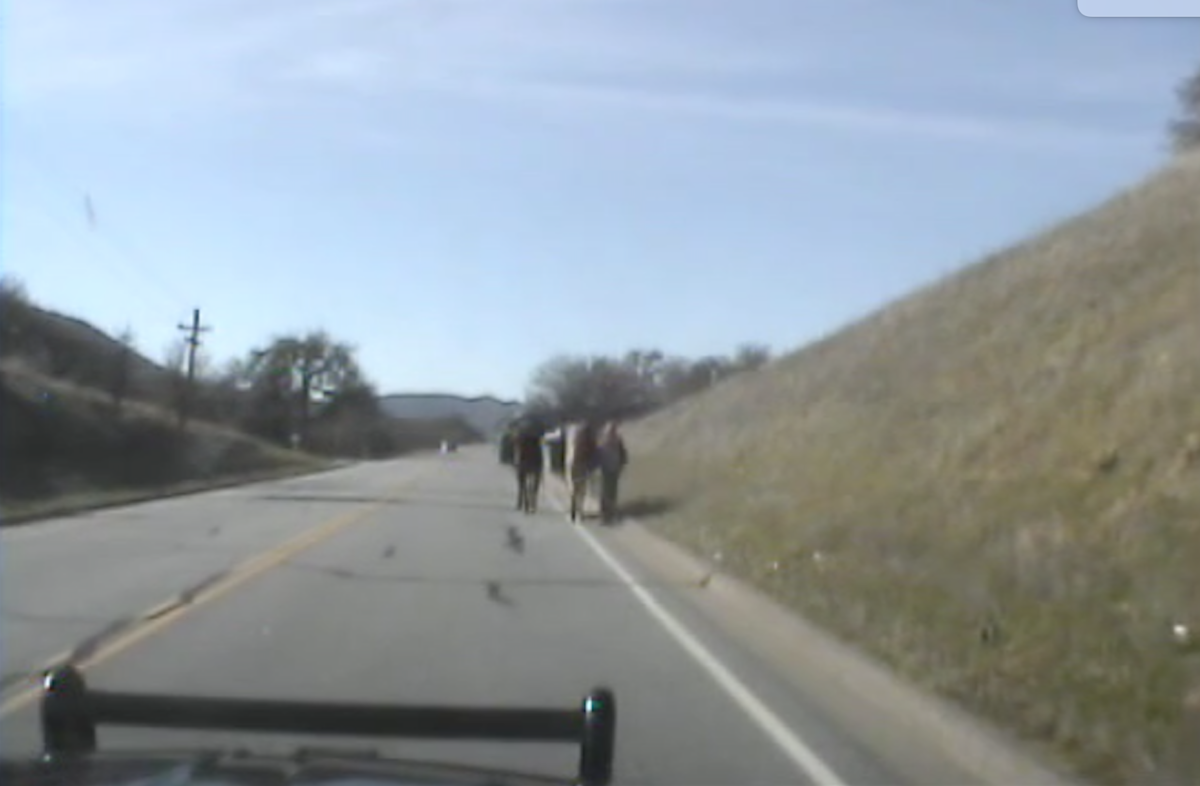 San Luis Obispo, CA: On January 21, 2021, John Sears, who lives a nomadic lifestyle and has traveled the state of California with his mules for the past eight years, filed a lawsuit in San Luis Obispo Superior Court alleging that the California Highway Patrol wrongfully and illegally arrested him in violation of his natural, Constitutional and statutory rights.

As noted in the first paragraph of the complaint: “By this action John Sears seeks to protect this ages-old nomadic way of life and the sacred relationship between man and horse to travel together with reverence and respect for this beautiful place in which we all reside called Earth.”

Sears, 73, and his mules began traveling when he was 36. He has lived full-time outside and traveled with his mules after retiring from his work as a tree trimmer in 2001 at age 54. He documents their endless journey on his website 3Mules.com, 3 Mules Facebook and Instagram pages, which have over 60,000 followers worldwide.

On January 23, 2020, the Mules were walking along Nacimiento Lake Drive, a rural two-lane country road near Paso Robles in San Luis Obispo County.  Such route is the only route between Bradley, California and Paso Robles other than Highway 101, and is part of the Juan Bautista de Anza National Historic Trail, a historically designated trail that stretches 1200 miles from Nogales, Mexico, through the California desert and coastal areas in Southern California and the Central Coast region, to San Francisco.

Despite the Mules right to travel such road, and all public thoroughfares in California, excluding interstate highways, he was ordered by CHP officer David Agredano to “stay off the road.”  Such order was not only impossible to safely comply with, it was in violation of Sears’ rights under the U.S. and California Constitution.

Sears states: “Nowhere in the California vehicle code does it state that the public thoroughfare is for the exclusive use of the high speed heavy machine called an automobile.”

Along substantial stretches, Nacimiento Lake Drive is hemmed with steep banks on both sides of the road.  It has narrow to non-existent shoulders in many areas as the CHP dash cam video clearly shows.  The non-paved area directly adjacent to the road was a steep upward bank, which would be difficult to impossible for a pack mule to navigate.

“The Mules were walking as close to the steep bank as we could to provide the motorists that were obeying state vehicle codes to safely pass.”

Sears further notes:  “If this arrest was legal, then all U.S. citizens traveling under their own non-motorized power (equestrians, pedestrians, cyclists, wheelchair, and all others) is likewise illegal.  This nomadic lifestyle which the Mules practice, which is over hundreds of thousands of years old, is how the Mules live on this earth. The Mules are bringing this case to court to preserve the right for all equestrians, pedestrians, and cyclists to travel on these public thoroughfares without fear of arrest.”

Sears filed a complaint alleging violation of his civil rights under Federal and California law, false arrest, and declaratory and injunctive relief.  In addition, to his damages, he seeks a declaration of his rights that he can present to law enforcement in the future, and for the CHP to issue a training bulletin informing officers of the right for equines and other animals to use the public thoroughfare. 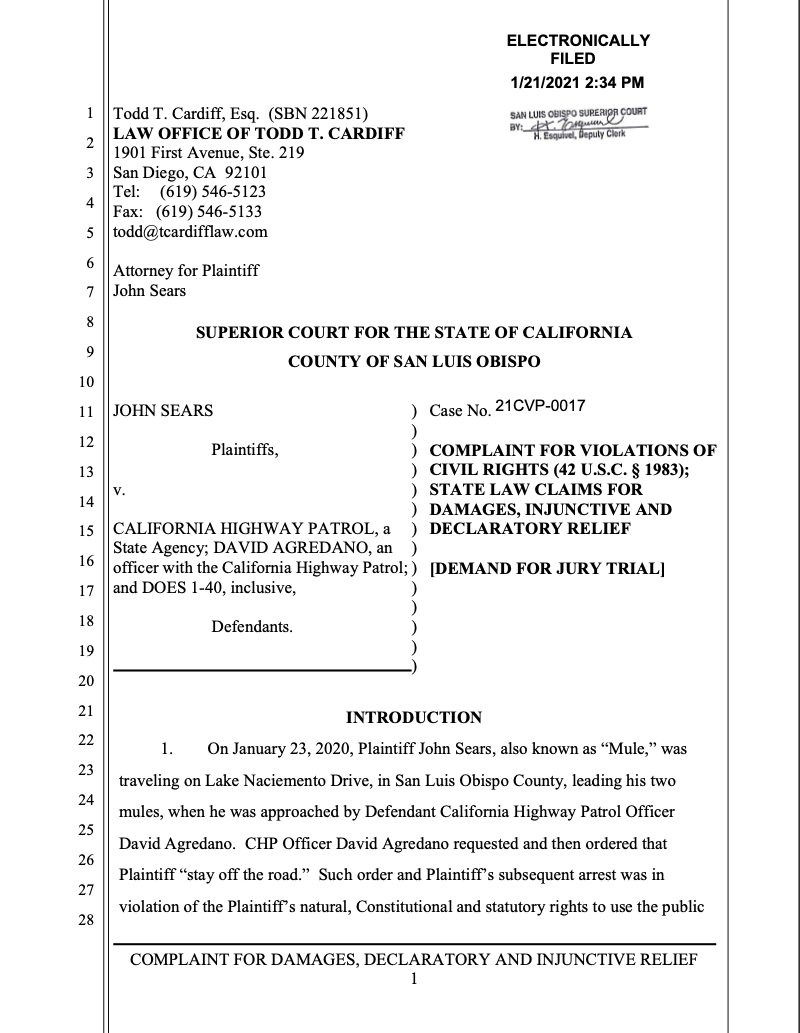 People often ask the Mules what their mission is. “Our purpose is to walk and live peacefully taking only what we need. Seeking balance and harmony with all that surrounds us and bringing the energy and value of this ages old way of life to all of those who we pass.”

“Spiritually, we are all unique. The Mules are experiencing the sacredness of this place in our own unique way. We are not doing anything spectacular. We get up in the morning, fix something to eat, and walk all day long. We enjoy it. Just walking. We enjoy the sacred act of walking in harmony and balance with the energy of this beautiful Earth that flows in, around and through us.”

“The public thoroughfare has been designed for the high speed motorists and their automobiles,” Sears explained. “The Mules and those who travel under their own power and speed (equestrians, cyclists, hikers) must preserve the right to use these same public thoroughfares as there is no adequate trail system to get equestrians and non-motorized travelers from one community to the next in this state.”

Sears has hand delivered copies of his Declaration of Emergency to over 200 city halls in California as well as to the governor’s office at the California State Capitol. In the declaration, he says the Natural World is being destroyed by a sprawling Megatropolis. Sears describes the Megatropolis as “the man-made world, spreading sprawling concrete, putting up lanes, putting up buildings everywhere. It wants all the remaining open space and it is unrelenting. It doesn’t want any other venues (pedestrians, cyclists, equestrians) to use the public thoroughfare except for its most favorite tool, the automobile.”