On October 6, 2021, the Mules were trailered across the Golden Gate Bridge and dropped off at Ocean Beach. We spent the remainder of the day walking through San Francisco, then into South San Francisco with no police contact.

We spent two nights in South San Francisco where we had stopped many times before, got up in the morning, and started walking through Brisbane, San Bruno, then into San Mateo. The Mules’ goal was to stop in San Mateo for the night at a place we had previously stayed many times before, but when getting there found it to be under construction, so we continued on where we found another place to stop for the night.

The monk put the mules on picket lines, fixed something to eat, then put his sleeping bag to the ground and went to sleep here in San Mateo.

I gave them my name, told them I was migrating South, and handed one of the officers my card.

They continued to ask me unnecessary and redundant questions at which time I stated I wasn’t going to answer any more questions. They then told me that I couldn’t be here because there were city codes against large animals in the city.

I told them we have been walking all day long and it was necessary to stop for the night. We could not walk in the dark as it would not be safe for we had no headlight or reflectors for that purpose.

The officer stated he had no previous experience with anybody walking through the city with a horse so he would call his supervisor and get her advice. So we waited for the supervisor to arrive on the scene and sort the whole thing out. She did and decided we could stay for the night. A total of six police vehicles showed up.

In regards to the officers claiming they did not know who we were I find that extremely hard to believe. We had been walking on the El Camino all day long with surveillance cameras on most intersections. At 4:20pm, one officer stopped, got out of his car, approached us, and started asking the usual question. We were certainly being surveilled and recorded. We stick out like a sore thumb needless to say with two mules.

Furthermore, on August 8, 2015, San Mateo Police Department posted on their social media page welcoming the Mules where we spent the night within city limits near where we stayed the other night. For them to say they didn’t know who we were was ridiculous. [Read our 2015 post about this here.]

Anyway all the above being said, the Mules packed up in the morning and proceeded to walk through Belmont, San Carlos, in and thru Redwood City, Atherton, Menlo Park, then into Palo Alto, where we spent the night at the Cubberley Community Center in Palo Alto on Middlefield Road. Having no police contact and a quiet peaceful night, we then proceeded in the morning through Mountain View and into Sunnyvale where we are now as a guest of another supportive member of the Three Mules Nation. 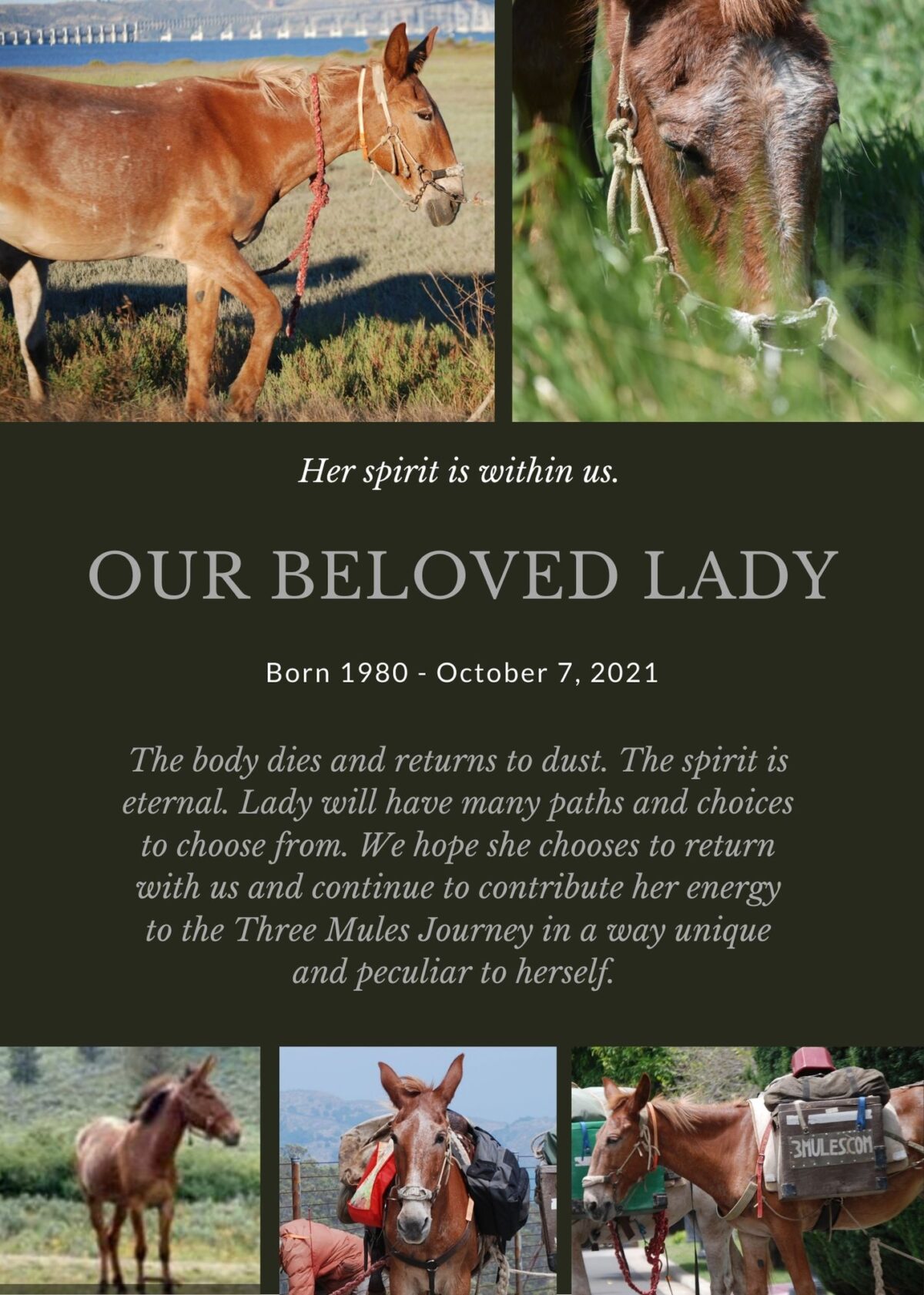 Lady, the mule who I purchased in 1986 in Coarsegold, CA when she was about 6 years old, and then roamed and wandered all over the western United States for 26 years, and in California for the past 9 years, has laid her physical body to rest on this day, October 7, 2021, at age 41 in human years. In horse years, we calculate this to be 114 years old.

The Mules want to give a special thanks to Jane, her parents, and Tucky for the wonderful care and place to spend her last years.

Myself, the Monk, says to myself how best to honor this wonderful soul who became an essential part of my life. If you have taken a photo of or with Lady, please share with us in the comments with the location and date and we will add to a video that we are compiling to remember her.

When I was saying goodbye to her for the last time [on 9/20/21], we both knew there was an understanding that we would come together once again to wander and roam over the face of this Earth practicing the ages old sacred ways of the nomads.

The body dies and returns to dust. The spirit is eternal. Lady will have many paths and choices to choose from. We hope she chooses to return with us and continue to contribute her energy to the Three Mules Journey in a way unique and peculiar to herself. 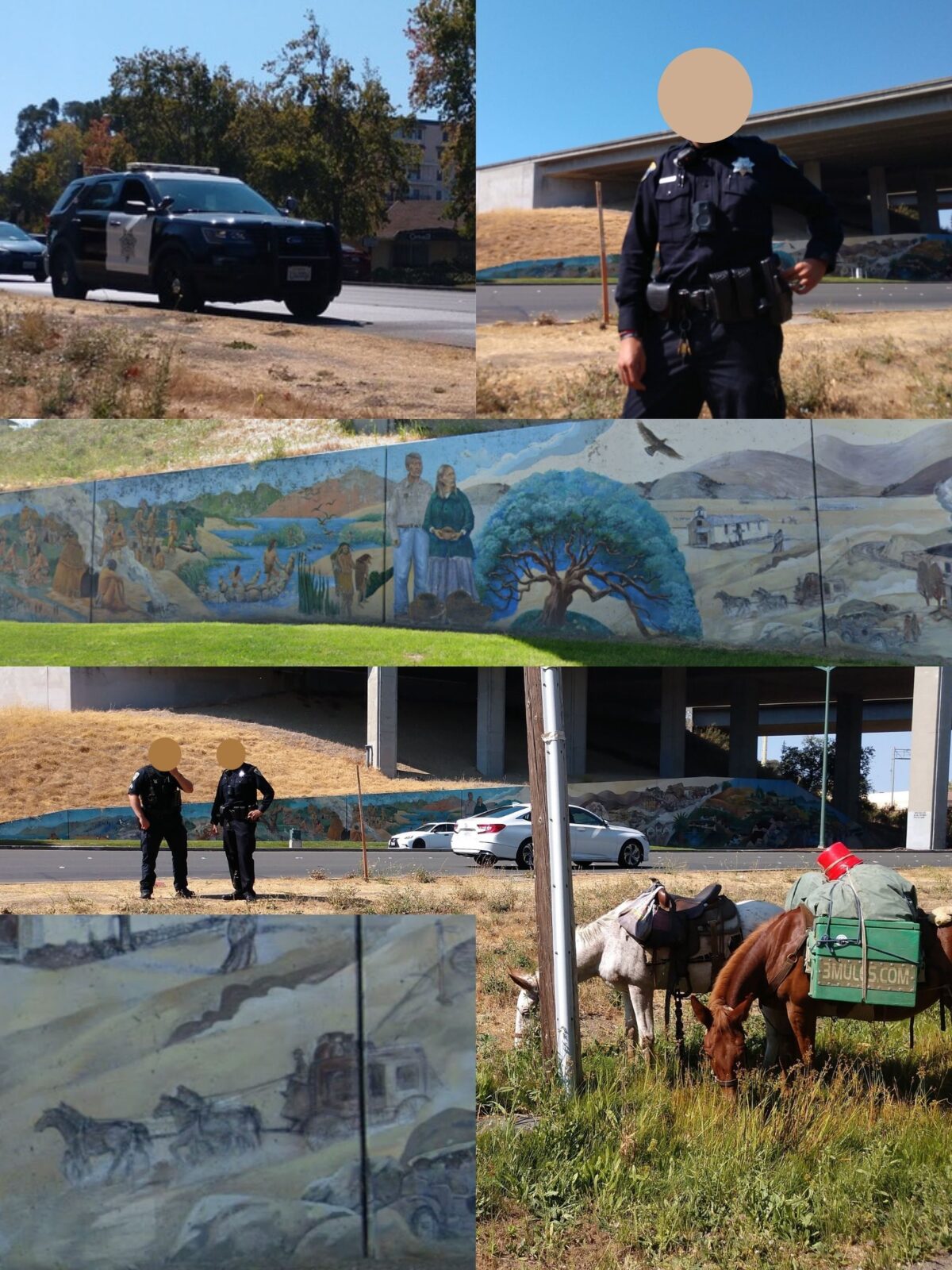 It’s ironic that across the street from us is a mural depicting the early travelers in this area who traveled by horse. Believe it or not, equestrian travel still exists today in the United States of America.

We the Mules are equestrian travelers. We are not criminals, nor a public nuisance, nor a drug addict, nor alcoholics. We pick up after ourselves, #LeaveNoTrace, eat Bob’s Red Mill organic, gluten-free old fashioned rolled oats, and volunteer our grass/weed abatement services along the public thoroughfare.

Help spread the word that 3 Mules are walking south thru the San Francisco Bay Area on our way to Southern California. We are currently in Richmond and will be in Marin County by Monday afternoon (Oct 4th) where we’ll continue our journey south towards San Francisco (then thru San Mateo and Santa Clara counties in the next couple of weeks).

We can make our journey south quicker if we are not stopped and questioned by law enforcement responding to frequent calls from “concerned citizens.”

if you see somebody that doesn’t look like the Monk/Mule leading Little Girl and Little Ethel, then that is a time to be concerned! Send us a private message where you see the mules if this is the case.

Three Mule Nation: help spread the word, share our post that we are heading south following the historic Juan Bautista de Anza historic route as we do each year. If you see us, take a photo, post and tag 3 Mules on Facebook or @3Mules on Instagram, so people are aware who we are and don’t call 911 to report equestrian travelers.