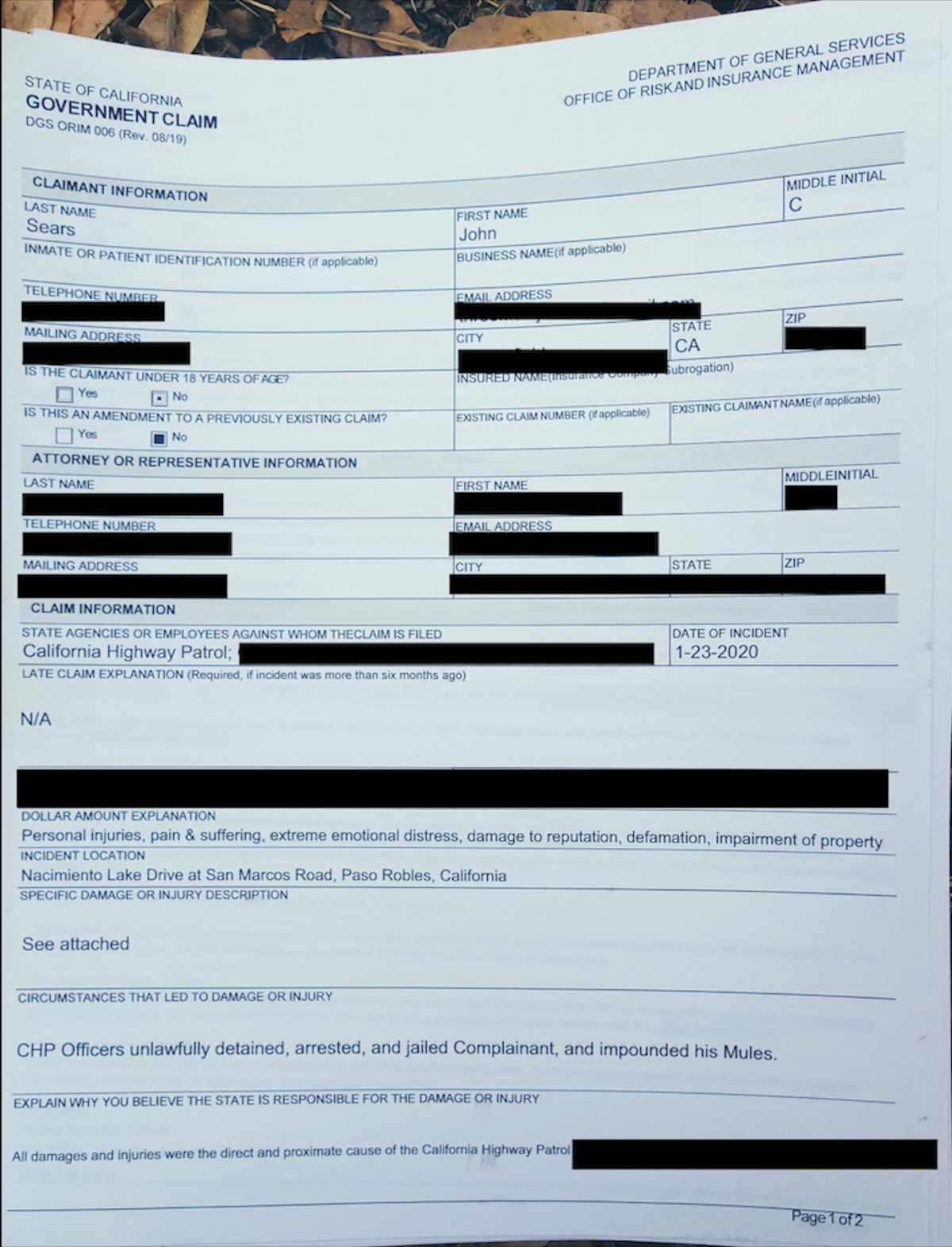 The Mules delivered to Sacramento the following claim against the State of California and its enforcement agency, the California Highway Patrol, for our unlawful and illegal arrest on January 23, 2020, for allegedly failing to obey a lawful order.

The purpose of the Mules filing this claim is to protect the Mules legal right to the use of the public thoroughfare. Without access to a strong healthy public thoroughfare, the Mules ages old nomadic way of life will come to an end. The energy of our ancestors who have roamed and wandered across this earth for thousands of years is harbored and available for our use. We will use it in this dimension and all others in which we may find ourselves to preserve this sacred way of life for ourselves and those who will inevitably follow. 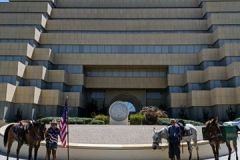 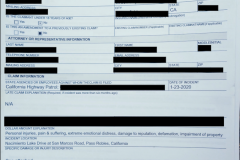 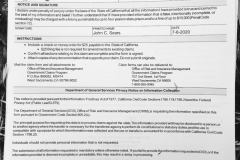 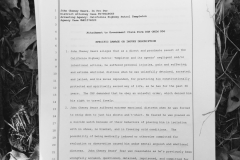 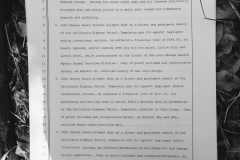 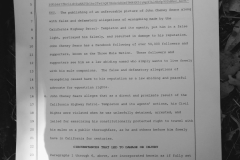 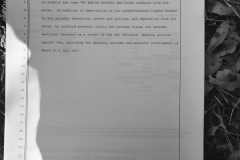 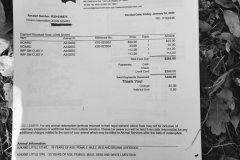 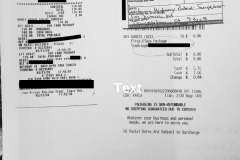 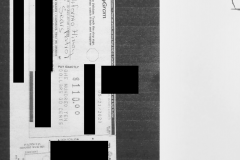 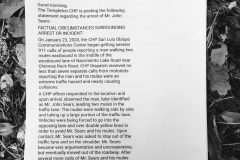 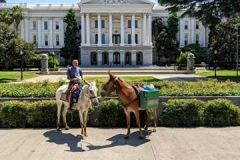 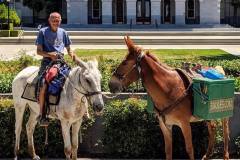 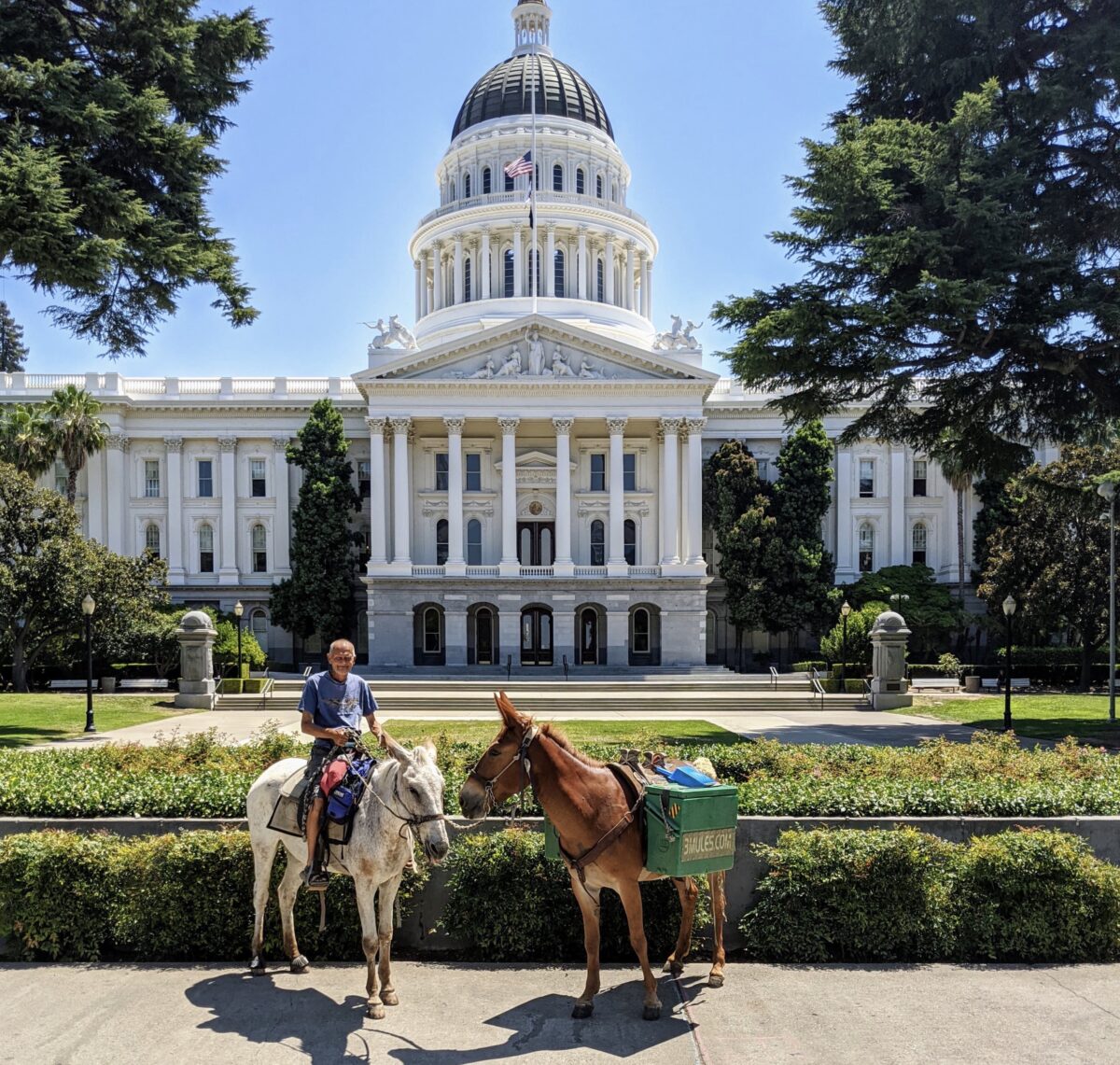 On Monday, July 27, 2020, the Mules brought our claim for over 1000.00 dollars pertaining to our wrongful and illegal arrest by the State of California and its enforcement agency CHP to the California State Capitol.

The energy of our ages old nomadic way of life that has been practiced by the mules through the ages is in company with this claim. The spiritual energy accompanying this claim will make itself known in the most of unforeseen ways.

Be ready get ready for what is to come. For the energy of our ancestors who have lived their sacred way of life on this Earth will never sit back and watch its beloved way of living destroyed by the megatropolis/man made world.

Yesterday as the Mules were walking in Sacramento, Lieutenant Freeman stopped to greet us and ask how we were doing. We met Lt. Freeman back in 2013 the first time we brought the energy of the nation, The 3 Mules Nation, into the confines of Sacramento.

The Mules had a good conversation with Lt. Freeman. The Mules talked about our ages old nomadic way of life and the positive effects of it being shown and practiced in Sacramento and all other cities throughout the state. Lt. Freeman agreed.

The 3 Mules Nation says thank you to the citizens of Sacramento, Lt. Freeman, and Sacramento Police Department for our safe and enjoyable passage through Sacramento, the capitol city of California.

While Little Girl and me were wondering which direction to go next, three Sacramento Police Officers came by, introduced themselves and expressed their curiosity as to what we were doing. So we said we were using our constitutional right to travel and move freely in anyone of all four directions, how we choose, when we choose. They said that’s cool.

On May 1, 2017 the Mules entered the Elk Grove in Sacramento county.

On the outskirts of town near Dillard Road, we came across the remnants of a 22 train car derailment that occurred during the heavy winter rains that flooded the area in February. We haven’t seen a derailment like this in a long time.

We found an quiet spot to rest with lots of green grass and shade to give Little Girl some rest. Here, the birds were singing and the geese were flying overhead releasing their energy of magic and power spurring the Mules into a new day of the same.

After we arrived in Sacramento, we spent the night along an abandoned railroad line. In the morning, I released Little Girl from her picket line so she could graze while I fixed my oatmeal for breakfast. Upon finishing breakfast, I went to get Little Girl about 200 feet away then packed her up. Off we went for another spontaneous unplanned day in the 3 Mule Nation.

Got to a Starbucks, secured Little Girl to a tree, went in, and charged my phone. Thank you Starbucks.

After phone got charged, we proceeded north to Del Paso and turned east. It was getting hot so we decided to stop and rest Little Girl under a tree. We were there for an hour when police showed up in two patrol cars, two officers asking many questions.

The first question we were asked was why were we here. They said somebody called saying there was a horse tied to a tree. Didn’t mention me. I was six feet away. One officer said he had had two horses and he knew that a horses should not be out in the heat. I just dropped my jaw, asked if I was being detained, received no answer, untied Little Girl and left. End of our resting time.

We proceeded along the boulevard for a mile went into a parking lot, got under a small tree and stopped.

Shortly afterwards, a reporter for the Sacramento Bee showed up, said he was curious as to what we were about and asked if he could interview us. We said sure, so he did for about 30 minutes asking questions and taking video. We explained our ages old nomadic way of life and the reason why we continue to live the way we do to preserve and exercise everybody’s right to travel by foot in the public thoroughfare and rest for the night. We saw the article and video that the Sacramento Bee posted online.

We were displeased of what the Bee published, focusing on the trivial and had no mention of our purpose of what we do all day every day. Following the Bee post, reporters from CBS13 and ABC10 have reached out and requested an interview with the Mules. We have not called them back as we found from past experience, local news stations cannot adequately report who The Mules are in the thirty seconds that they have to air a story, and most often the story is edited down to fluff. We find that the only three writers who have every captured the Mules true essence are Rick Paulas for The Kernel/The Daily Dot, Mark Luckach for The Atlantic, and Sarah Christie’s column for Mules and More.

Later that night, we found a place to rest for the evening/sleep.

The next day, as we were traveling through the Sacramento megatropolis, temperatures was in the 90s. It was time to obtain Little Girl a drink of water. We stopped at a business, asked if we could get water from the faucet on his building and person said no. He said that if we did try to get any water from the faucet, he would call the police.

This response to our request prompted the Mules to bring forth and into view Mule Proclamation 2645-B passed by the legislature of common sense and decency. This Proclamation states as follows: “Any corporation, business or private party who refuses any person traveling with or without an animal companion water for said personnel survival has committed an act of extreme inhumanity. A penalty of not less than 10 years in a not so nice place plus a $50,000.00 fine which will be placed in a multi-use state trail system fund, which will be assessed against the convicted.

The Mules will be in the Sacramento area showing how we live and the challenges we meet on a day to day basis and gathering people’s thoughts and energy as we walk along. In the past few days, Little Girl and I have enjoyed meeting and talking to many of the Three Mule Nation followers that live in the Sacramento Megatropolis.

The Mules are pleased to say that for every negative encounter the Mules may experience as we walk north, south, east, west, when we choose, how we choose, we have ten times more positive experiences with people that we meet while walking and living responsibly outside all day every day.

While KCRA3 only broadcast a 40 second clip of the interview, here is amateur video capturing the full interview unedited.

Thank you to California Highway Patrol Capitol Officer Jones for ensuring a smooth and welcoming visit for the 3 Mules. When the Mules arrived at the Capitol, CHP bike patrol officer escorted the Mules to a fenced, shaded area with water for Lady, Little Girl and Who-dee-doo. CHP mounted patrol unit officers Dillon and Maxwell kept an eye on the kids while Mule delivered the DOE to Governor Jerry Brown’s Office.