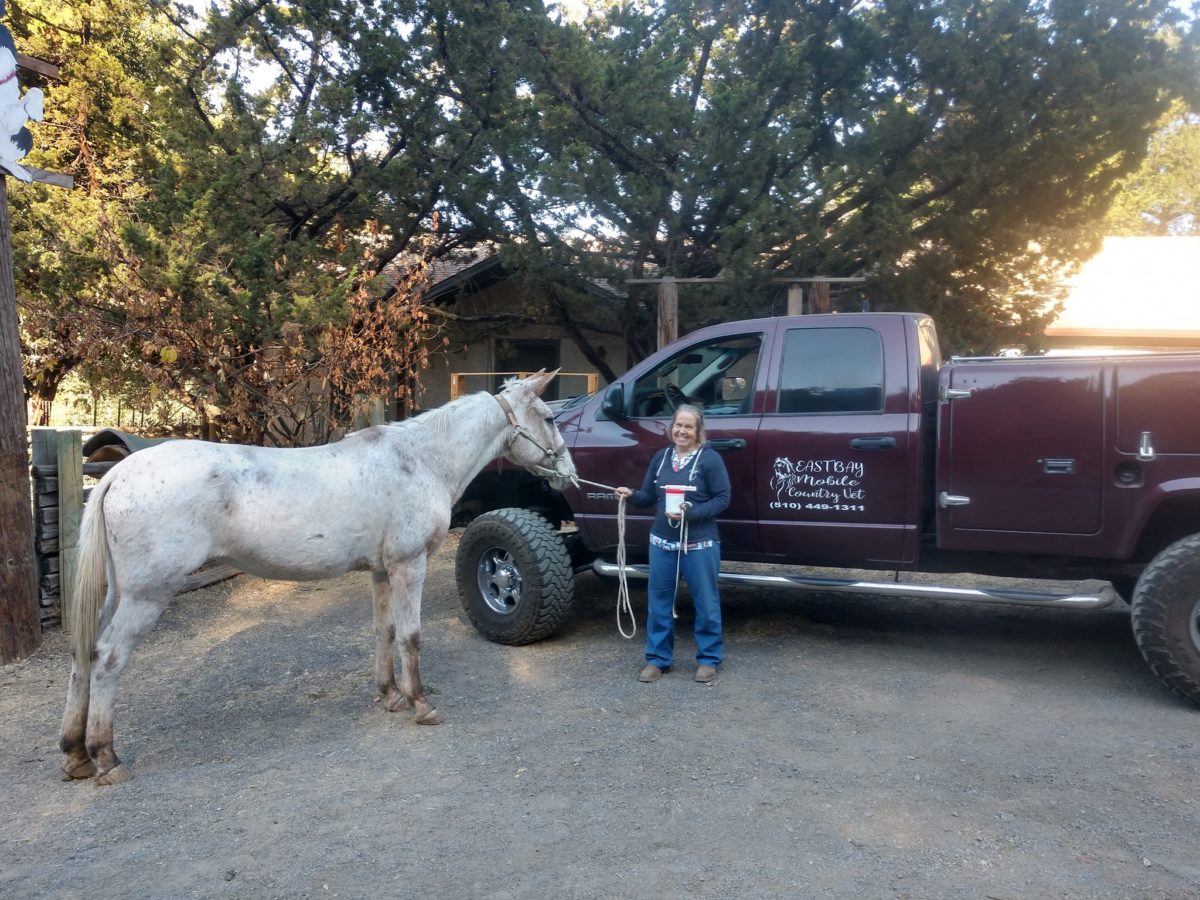 The veterinarian came out today to look at Little Girl. She has cellulitis. Maybe it’s time to retire her. We’ll wait and see.

In the meantime, the Mules are searching to purchase two 15.3 – 16 hand stout draft mules, 3 to 18 years of age. Must be easy to shoe and healthy. We don’t want white as it makes the mules too easy to spot at night for thieves and others with less than a legitimate intentions. If you have a mule for sale that fits this description, please private message photos, location, price and your contact information. Would like to see photos of teeth and video of back feet being picked up.

Frank is no longer on the job.

Unfortunately it was not possible for me to know that beforehand. Frank was offered to us for $250. It cost us $250 to have him trailered to where we were. He was a large young mule, 1400 pounds, and we took a chance, sight unseen and bought him.

To keep using Frank in a highly concentrated urban area was an accident waiting to happen. Therefore, the decision was to give him to Larry and Paula who own and run a stable in Bakersfield and have been strong supporters and friends of 3 Mules. We have no doubt that they will provide a good home for Frank. Larry has a mule named Bowie to keep Frank company.

So, once again the Monk and Little Girl will be on their own walking in any one of four directions how they choose when they choose one step at a time all day every day regrettably without Frank.

The Mules give thanks on this Thanksgiving Day. We thank all the people who follow our page contributing their energy and effort to this place of one human being alone, but never alone, walking with his or her animal companion peacefully and responsibly, carrying no weapons, but carrying the energy that has been created and harbored for hundreds of thousands of years by all those who have given and resided in this place understanding and knowing the absolute value of true human freedom as only it can be experienced and practiced on this earth. The Mules are happy on this day. We hope the same for you.

Video showing the routine of the Mules when we stop to rest for the night. We respect the land, keep it clean and leave no trace.

One day twenty-four years ago, Little Girl had really gotten me mad. She was a super brat. Well, she flipped my switch and the last thing I screamed at her, “You’re just a little girl and you will never grow up! You’re always going to be a Little Girl.” Well since Lady retired, she has grown up and taken on Lady’s role. She is doing a great job.

In California, there is a high speed bullet train being built at a cost of $64 billion dollars. The Megatropolis plans the first prototype to run from San Francisco to Los Angeles. It will split the state right down the middle much like the San Andreas Fault with no less potential disastrous consequences.

It will require a massive surveillance apparatus to guard and protect from terrorists at a cost of billions of more dollars. People living anywhere nearby will be considered a possible terrorist threat by the surveillance state. Their children will be tested in school for possible terrorist tendencies. This will all be done under the guise and pretense of providing a fast, quick way to get from point A to B in complete comfort and ease.

Pull back the smoke screen of glitz, gadgetry and endless discovery and the Mules see the Megatropolis using this bullet train (machine) to seize and bring under its control more space to satisfy its insatiable appetite for contained and controlled energy (be it human, animal, wind, sun, etc.) on earth.

The bullet train is yet another scheme brought forth by the Megatropolis to drag the Human Race down a dark hole to be disconnected from ourselves, each other and our home, the Earth. To be forever wandering and lost in the manmade world of gadgetry, glitz and endless discovery. You bump into somebody, they ask you who you are, where you are from, and you won’t have a clue.

The Mules have an alternate proposal to the Megatropolis’s bullet train:
A multi-use trail system going in all four directions,
– Hooking all communities to all communities
– Connecting people with reverence and respect for each other and their surroundings
– Moving at a pace that is in harmony with the natural flowing energy that flows around and through us
– Learning to use that energy to heal our bodies and nurture our souls
– Teaching the children the magic and joy of being real human beings connected to the Natural World
– Bringing people together to solve the problems that face them with cooperation and respect.

The Public Thoroughfare, a multi-use trail system, is the place for the fist step in the right direction.

Note: If you agree with this, please make a copy and send where you think it will do the most good.

Back on June 6th, we posted the following question: “Can anybody out there make us a green-colored, 1000 denier nylon tarp measuring 75″ X 105″ (8’9″ X 6’3″) with 1/4-inch grommets on all four corners and on the middle of each side? Color preference is green, tan, brown or grey, not black as that would absorb and retain too much heat. This is not a tarp that we can simply purchase at a hardware store. If so, please message us with total cost (material, labor and shipping to California), time to deliver, and contact info.”

Thank you to those who took time to research and send us information on places that we could contact. We followed up on each lead sent to us. Most places quoted 4-6 week time frame to make or could only make the tarp in black color, which we did not want.

On Tuesday, June 21, Raj Sharma, owner and president of Tent City Canvas House in Fresno, contacted us that he read our story, looked at the 3 Mules website, understood our request and specific need, and wanted to make and donate the tarp as described for the Mules. We said thank you and accepted his kind offer.

We were 25-miles away in Reedley. Mr. Sharma said that this is Tent City’s busy season as they make tents all over the country and around the globe since 1958, but he would make it a priority to get this done for us to pickup on Friday morning, our estimated our arrival to Fresno.

On Friday morning, the Mules arrived at Tent City. Everyone was very nice. The tarp was made exactly to our specifications. The Mules are very appreciative to Mr. Sharma and his staff at Tent City for their effort and support as this tarp is a necessary item in our day-to-day nomadic way of life.

Pictured is Babe, the Mule we have been given the use of her for as long as we need her by the owners Dan York and Sarah Christie. Dan and Sarah live on Wind Wolves Preserve, outside Bakersfield, where Babe has lived for about four years.

At 16 hands tall, Babe is an 11-year old black Molly mule out of a Tenessee Walker. She is the same age as Who Dee Do. Babe is very gentle and well trained. She’s been used for trail riding and light packing for the last 4 years, and was part of a professional pack outfit before that. She will make a great companion for us in our ongoing effort to bring a comprehensive multi-use trail system in this state and country. There is no good common sense reason for this not to happen.

So thank you Dan and Sarah and all the many people who have shown their kindness and support and given their hope, faith and energy in this extremely important effort. A vision that will give a real future to the generations to come. A vision that all can watch and contribute to. A vision of hope, faith and energy freely given. A vision of hope and faith intensifying energy that will materialize into a multi-use trail system.

Thanks for everyone using the #3Mules or @3Mules hashtag on your Facebook, Instagram and Twitter posts so that The Mules can be aware of the photos taken of us. The other day, we noticed that the Twitter posts of City of San Mateo and Foster City Police used the hashtag #NomadicLife with our photos. We thought that hashtag was cool too, as it shows that the the cities of San Mateo and Foster City understand what The Mules are about. So thanks and continue using #3Mules and #NomadicLife or @3Mules so we can find and share your photos.

As part of a glimpse into our nomadic life…

As previously stated in other posts, I lived my early childhood years in Marin. My later childhood years were spent living in the Palo Alto area when it was still mainly undeveloped, open space or orchards. Thus, I am really familiar with this area along the El Camino Real, but sometimes it is hard to recognize this place now with all the new buildings.

While in San Mateo, the Mules met this gentleman also named John, and we started talking. As the conversation further progressed, we discovered that we both attended the same middle school and high school in Palo Alto in the 1960’s. We had the same teachers but were a couple years apart in class. We both have younger sisters the same age. John phoned his sister and asked if she recognized my sister’s name. Immediately she responded that they were in the same class in junior high and high school. This encounter is something we would describe as coming out of the who-dee-doo. Surreal. This is the first time that I ever met a stranger on the road that went to the same middle and high school as I did.

We then continued south on El Camino Real and delivered the DOE to San Carlos City Hall.

The kids were getting hungry, so we took a side street and explored the range. We found this place knocked on the door and asked if we could graze. The gentleman said yes. We said thank you. We were there about two hours. The kids had a nice dinner.

We then got back on El Camino Real and looked for a place to rest for the night. We came upon Sequoia High School. The gate was open and we squeezed through and went to sleep. Thank you Sequoia High.