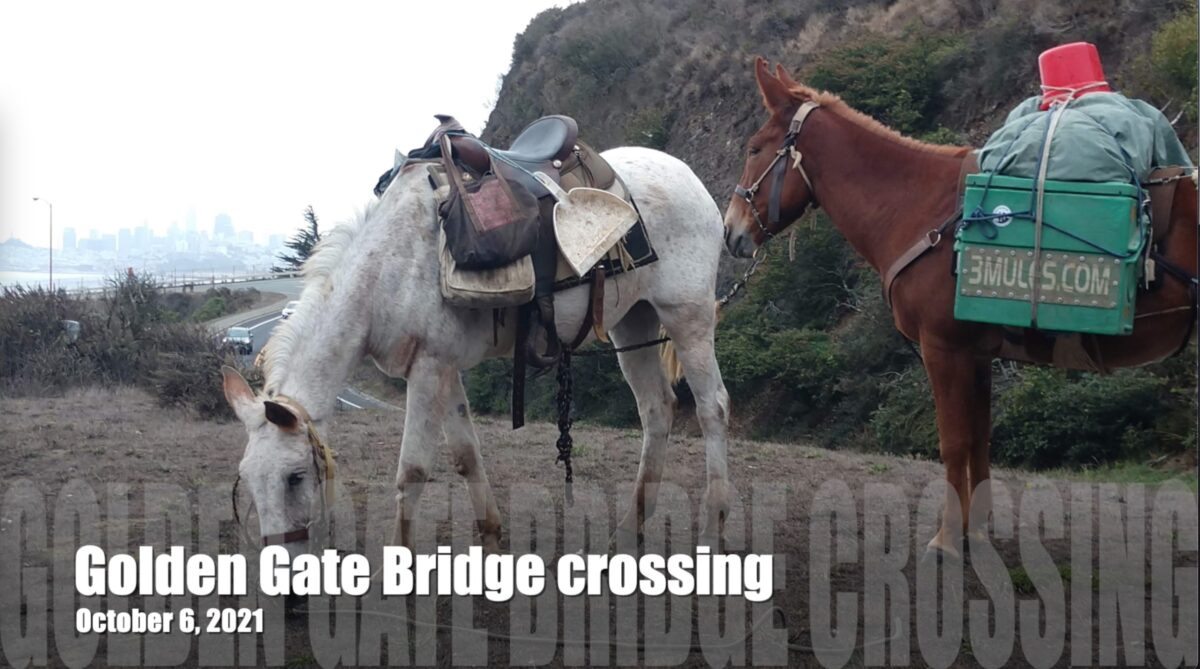 Late morning on Tuesday, August 25, the Mules began the walk from the hills above Sausalito where we have been staying for the past week to the Golden Gate Bridge Vista Point on north end.

I tied the mules up to the chain linked fence at Vista Point in a place out of the way from people and traffic. I informed Golden Gate Bridge police officers that I was going to walk across the bridge to deliver my letters to the Administrative Office and then come back to pick up the mules.

While it is crowded with pedestrians and cyclists during daylight hours, the Mules still feel that our request was not unreasonable to the Bridge Manager for permission for the Mules to walk across this sidewalk at 2AM when the sidewalk has no pedestrians, little cyclists and least automobile traffic on the road.

As I left the Administrative offices and started my walk back to Marin, Bridge Authority approached me and informed me that they had contacted the Marin Humane Society to bring a trailer to Vista Point North Side to help the Mules cross the bridge. When I arrived at the north end, an animal control officer was waiting for me and I helped load Lady, Little Girl and Who-dee-doo into the trailer, where we were dropped off at Crissy Field in San Francisco. The Marin Humane Society officer gave me her phone number and said that if any officers in San Francisco gave us trouble to have them call her.

Thank you to all those who showed support in our stance by sharing our posts and sending your emails. Bridge Authority finally took responsibility to provide an alternative solution in lieu of the mules walking on the sidewalk by contacting the Marin County Animal Services in which they have a contract to handle any situations concerning animals. This was a different answer than what we were provided two weeks ago when we first contacted the Bridge District about crossing the bridge.

The Mules still stand on what we wrote in the letter and urge the Bridge Board of Directors to revisit the policy on animals. We feel that this is a positive step and the initial blueprint has been drafted. Final blueprint will be when mules can finally walk across the bridge.

—————————–
On a sidenote, the Mules would like to thank Rob from Sausalito who invited us to stay on his property in the hills of Sausalito for the past week. This gave the Mules time to rest, contemplate and write our follow-up letter to the Bridge Manager and Bridge Board of Directors. The Mules would also like to thank the Marin City Public Library for having computers and printers for public use so that we could print the documents. Here is a photo of Rob. We hiked from his property along the ridge to an overlook with spectacular San Francisco Bay views.

The 3 Mules are going to the north Vista Point of the Golden Gate Bridge where they will be watched by a friend, while the Monk walks across the bridge to the Bridge District office on the south end to deliver this letter and Declaration of Emergency to the Bridge Manager and Bridge District Board of Directors. We will also be sending copies of this letter to Governor Jerry Brown, Mayor Ed Lee and various news outlets that have been following and inquiring about our journey.

Last week, we were asked by park police to provide 24-hours notice when we were ready to cross the bridge. On Monday, we called the park police phone number provided to us on Friday, and were told to call the Bridge Manager’s office to confirm the crossing. Thus we called the bridge manager’s office informing them that the Mules planned to be at the bridge at noon. They said okay and sent an email to call Park Police dispatch an hour before ready for transport. We were also told on Monday that the Mules had permission to stay at the Park Police stables in the Presidio on Tuesday evening.

Based on emails that I saw yesterday, I understood that arrangements had been made with the bridge manager and National Park Service as we had did what we were told last week. This morning, I didn’t turn my cell phone on because I didn’t think that I needed to. My objective in the morning was to get to Sausalito City Hall to deliver the Declaration of Emergency before heading to the bridge.

When I arrived at the Golden Gate Bridge, I was informed by U.S. Park Police that they were no longer going to trailer the Mules across the bridge in their mounted police trailers due to rules that they had to follow. We were also informed that the invitation to stay at the stables was rescinded and that we were not allowed to be anywhere within the Presidio because it is a residential and business area. If we were trailered, we would be required to be dropped off by Ocean Beach. The U.S. police required vaccination papers on the Mules, which we don’t have, thus they said the mules could not be transported in their trailer or stay in their stables. This was told to us when we were at the bridge. They said this is to prevent risking the health of their horses by unknown animals.

We called the Bridge Manager who said that this issue was out of his hands, and that there was nothing on his end that he was able to do. While standing at the bridge, we were surprised that this arrangement crumbled since emails and phone calls last week and Monday from Bridge Manager and Park Police indicated everything was okay.

When a very nice person heard about these last minutes development, they immediately drove from Sonoma County to the Golden Gate Bridge with a large horse trailer to trailer the Mules across the Golden Gate Bridge. However, as upsetting it was to them for the time they took to do this kind deed, we refused their assistance as we were truly taken aback by everything we had just heard from the U.S. Park Police when we arrived.

The Mules and all venues have an equal right to use the public thoroughfare. It is public. It is open to all comers. It is the tool we use to move freely in this country. Highway 101 was built and now maintained at huge expense with taxpayer money. The bridge authority was given the right to charge tolls to those that use the 101 public thoroughfare crossing the Golden Gate, but should not given the right to exclude any segment of the public that needs to cross the bridge. Mules being one of those segments.

The justification provided by Bridge manager is for safety. Any common sense mind agrees that there is no safety issue at all. The eastern side walk of the bridge is closed to pedestrians at night, but open to cyclists. We requested an exception to walk across the bridge at 2AM when there is little bridge traffic and no pedestrians on the bridge. The sidewalk is still wide enough for a bicycle to pass at 2am. So this is not a safety issue.

Last year the mules walked through the San Francisco Financial District, Market Street, the Embarcadero, and Fisherman’s Wharf where it is crowded with people and cars. We had no safety issues. We have walked throughout California without safety issues.

We did not accept a trailer ride offered by the supportive lady from Sonoma simply because the energy of our life (journey) in large part is the right to equal use of the public thoroughfare. It is the lifeblood of this ages old nomadic life which we still practice and enjoy. If the bridge authority can successfully put forth a common sense argument in the public court of common sense and deny the Mules their right to walk across the Golden Gate Bridge, it then must take full responsibility to arrange for a trailer assisted crossing.

The Mules are creating a blueprint by which anybody traveling with their mule, horse, llama, donkey, etc. can cross the Golden Gate Bridge.

This afternoon, the Mules were grazing in an open area when Mill Valley police officers showed up and introduced themselves. We had a nice conversation. They welcomed us to Mill Valley and for this, we say thank you.

Earlier today, Novato Police Department Sergeant Howard stopped to introduce himself and welcome the Mules to Novato. He said to let him know if we encounter any problems and gave us his business card.